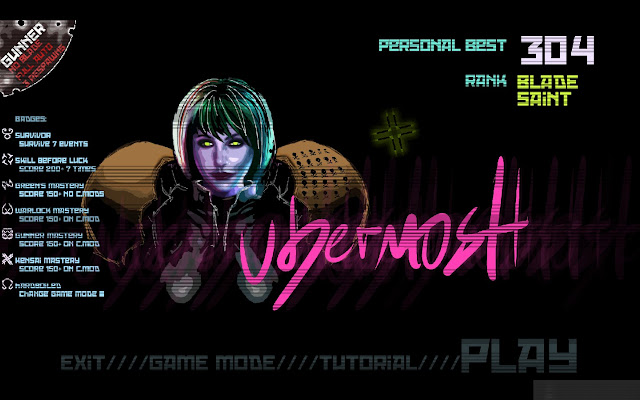 UBERMOSH is a Dystopian Sci-Fi Arena Shooter done in the top down, twin stick format. The mouse controls where the player fires their gun or swings their sword while the keyboard controls movement. The goal is to survive 90 seconds of combat while killing the most amount of enemies on the screen during the time limit.

Click 'Read more' to read my full experience of the game.

The music is great to listen to. It's heavy industrial metal and sells the game very well with it's focus on raw, electronica rock aggression. Unfortunately, it distracts the laser like focus one is required to harness if they wish to stand a chance accomplishing the goals set in the game. Within 30 minutes, I muted the music for being too effective at exciting my senses.

Artistically it is also very well done. It's minimalistic with it's detail, providing no significant model features for the enemy and main character. In exchange for the dirty and plain appearance, the weapons are exaggerated in size, showcasing the real reason someone would be playing the game; the combat.

The terrain represents the war torn and alien world with mostly dirt and mounds of rock for walls. It's simple and effective for an Arena Shooter such as this game.

Getting 100% achievement for the game takes around 2-3 hours pending how lucky you are and how quickly you understand the spawn placement system. 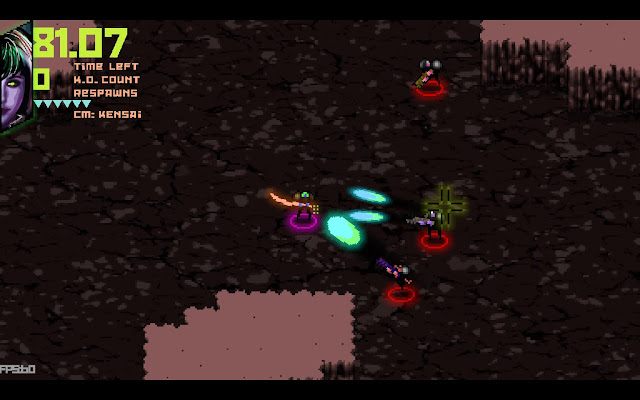 The gameplay design decisions are ultimately the reason I'm not recommending the game. Enemy projectiles will randomly phase through walls while none of the guns you can pick up will phase through walls. Enemies will teleport onto the battlefield within a short distance outside of the screen, making location awareness and shooting off screen the measurement of life and death. The display is presented in widescreen and due to how fast the enemy is in the game, makes vertical assaults the only real threat.

Finally, the most annoying aspects are having the guns swapped without your consent until the Ultra Shotgun is acquired and the screen shaking during every attack. This isn't a game where all 3 rotating guns are balanced. All enemies require one bullet, making area of effect the most important tool in your arsenal.

In Closing: It's a very basic arena shooter/slasher I've seen many times for flash games. Pick up guns, fire them with one button and deflect bullets with the default melee weapon. The artificial difficulty makes the game too annoying for a legitimately enjoyable experience. I see people only playing it past the first two playthroughs for the reasonable Steam Achievements and nothing more.
Eingestellt von Roy Kingston um 11:26 PM