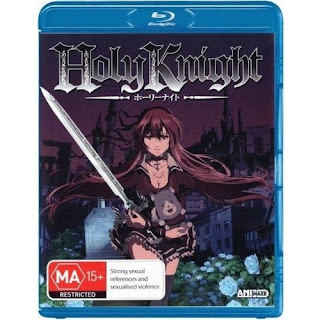 Holy Knight is an animated mini-series about two young adult named Lilith and Shinta.  This show starts off with Lilith as a little girl living in a small village until suddenly it is being attacked by what seems to be vampire hunters from the Vatican.  This sadly forces Lilith's parents to send her away via boat in order to protect her from danger.  Cut to years later to when we are introduced to a guy named Shinta, a very normal guy with nothing interesting to say about him.  While on his way to class, he runs into a more grown up looking Lilith and comes to shock when he sees that she is hitting on him.  Later that day Shinta runs into Lilith whom wants to drag him into a room so that she can do the monster mash with him (the sexual kind of monster mash).  Shinta freaks out and explains to her that she can't force a sexual relationship onto him and then he walks off.  We soon find out later that Lilith is the last of her kind, this is the reason why she wants to reproduce with Shinta...  Or so it seems as there could be a much more sinister reason why Lilith wants to make sweet, sweet snoo snoo to him.  Did I forget to mention that Shinta's big breasted best friend is jealous of him and Lilith hanging out all the time?  Did I also forget to mention that Shinta's cat can transform into a cute girl that is sworn to protect him from Lilith?  Maybe I should also mention that Lilith also has a talking animal that's trying to help her seal the deal with Shinta and is also trying to have his way with Shinta's big breasted best friend?  Not to mention that the hunters from Lilith's past are in town and are after Lilith.  All this sounds like a fun sexy action series...  Right?  (Click "Read More" to read the full review).

This series might sound like a supernatural hentai but instead it is a supernatural drama that's about a girl trying to force herself into a relationship, so describing what this series is about will mislead people into thinking that this is a hentai.  The story in this series was very average and doesn't pull you in all that much and so you will have to force yourself to watch it.  The biggest problem with the story wasn't the main plot line but all of the random sub-plots that come out of nowhere as they get in the way of the series and don't add anything important, so it adds in a heavy filler factor to this series.  When you do get an important sub-pot, you'll feel dread as you'll think it's just going to be another useless scene and that's a sign of very bad directing.  Even when those important scenes do something for the story, you'll find that they are tacked on and not very strong.  Another huge problem with this series is that the random filler gets in the way so much that the main plot elements get thrown to the side just to make way for the filler content and I absolutely hated that.

The problems I have do get fixed a lot in the second part of this series and it helped a lot but you can also sense that there'll be something added to the end that'll make the time not worth it.  I'm just going to do a minor spoiler and say that this series ends on a cliffhanger and the problem with that is that it ends in a way where you do not care for what happens next.  The drama in this show can be pretty okay at best.  There were scenes where I cringed so hard that I was spurting enough lemon juice from my eyes to make enough salty lemon aide for the entire TNR crew.  Comedy in this series was very generic and cliche to where the humor found in this show has been done so much and much better in other shows that it very dull and boring.  Action in this series suffers the same problem as the comedy and was a drag to sit through.  I was mixed on the characters as some of them were likable while others didn't do anything for me and were just boring.

Artwork in this series was decent as it had characters that looked good and some very nice looking backgrounds that had some nice detailing.  Oddly enough, art seemed to look its best during the sex and nude scenes.  Speaking of sex and nudity as the nude scenes looked good and oddly enough, the most character detailing you'll see in this series is on Lilith's bra (not the one that's pictured above) and indeed it does have some nice detailing (not saying that part in any perverted way).  There were some spots though to where the artwork did look a little cheap and yes, some of the nude and sex scenes did suffer from this as well, so this isn't the case where they blew their load (no pun intended) on the sex and nude scenes.

While characters did look decent, their designs weren't that great as they were very generic and unmemorable.  Going back to art, some very minor characters in this series did look awful as they were very janky and odd looking to where they looked out of place.  Animation in the series was decent and very consistent with no weird drops in quality.  I'm going to sound like a pervert again but this series does have breast jiggling and it was animated well and not over the top, it looked like a natural realistic breast jiggle (damn do I sound perverted).

This release of this series only comes with the Japanese dub and English subtitles and the Japanese dub was passable but nothing all that special.  I know the US release of this series has an English dub included and I am interested to see how that turned out.  The acting in this series can get a little weird at times, especially during the scenes where Lilith is hitting on Shinta due to the cheesy dialogue.  The soundtrack was actually good as it had some nice tunes in a nice soft rock style and the only problem I have with it is that it was mixed way too quietly during the opening and closing credits.

Overall, while this anime does have some good qualities to it, most of it was uninteresting, very poorly executed, generic, and a little off.  I do not recommend going out of your way to even pirate this series as it'll be a waste of an hour of your time and is best left collecting dust in a bargain bin.  Not worth it.