Movie Review: Guardians of the Galaxy (2014) 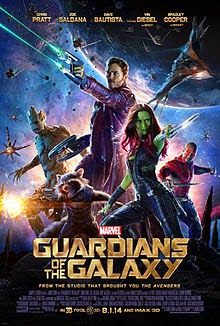 "Guardians of the Galaxy" is an sci-fi action comedy film based off the Marvel comic book series of the same name. This film starts off in the year 1988 where we see a kid named Peter Quill sitting in a hospital listening to a mix-tape his mother had made. The reason why he is in the hospital is because his mother is suffering from cancer and is on her deathbed. His mother ends up passing away and leaves him very sad so he runs out crying (understandably so). While he is outside he gets taken by a huge spaceship and then we jump forward twenty-six years later to the year of 2014 A.D. AKA this year that we are currently living in.  Peter has grown up and is now a space treasure hunter going under the nickname of Star Lord (played by Chris Pratt). Star Lord is going through some ruins and battles some small "Space Dinosaurs" and comes across a special item. Star Lord isn't alone as he is attacked by some weird warriors but Star Lord manages to escape. Those weird looking warriors end up being the men of an evil being known as Ronan the Accuser (played by Lee Pace) and he is mad as he needs that item to give to his leader named Thanos (yes, that Thanos) and sends out Thanos' adopted daughter, Gamora (played by Zoe Saldana) to retrieve the item. (More about what this film is about plus the rest of the review can be found by clicking the "Read More" button).


Star Lord tries to sell the special item for money but is refused cash due to Ronan wanting it, leaving the dealer scared for his life. Not too long after that we see Star Lord getting ambushed by not only Gamora but also by two bounty hunters named Rocket (A crazy Raccoon with a Rocket Launcher played by Bradley Cooper) and Groot (A powerful tree man played by Vin Diesel ("XXX (2001)", "The Fast and the Furrious (1999)") who just happened to be there at the time. Their battle is cut short as they all get busted by the cops and thrown into a huge space prison where they meet up with a guy named Drax the Destroyer (Played by Dave Bautista ("The Man with the Iron Fists (2012)" and two time "Royal Rumble" winner for the WWE (World Wrestling Entertainment)). Now this rag tag group must learn how to live with each other and escape prison so they can stop Ronan from getting the item. 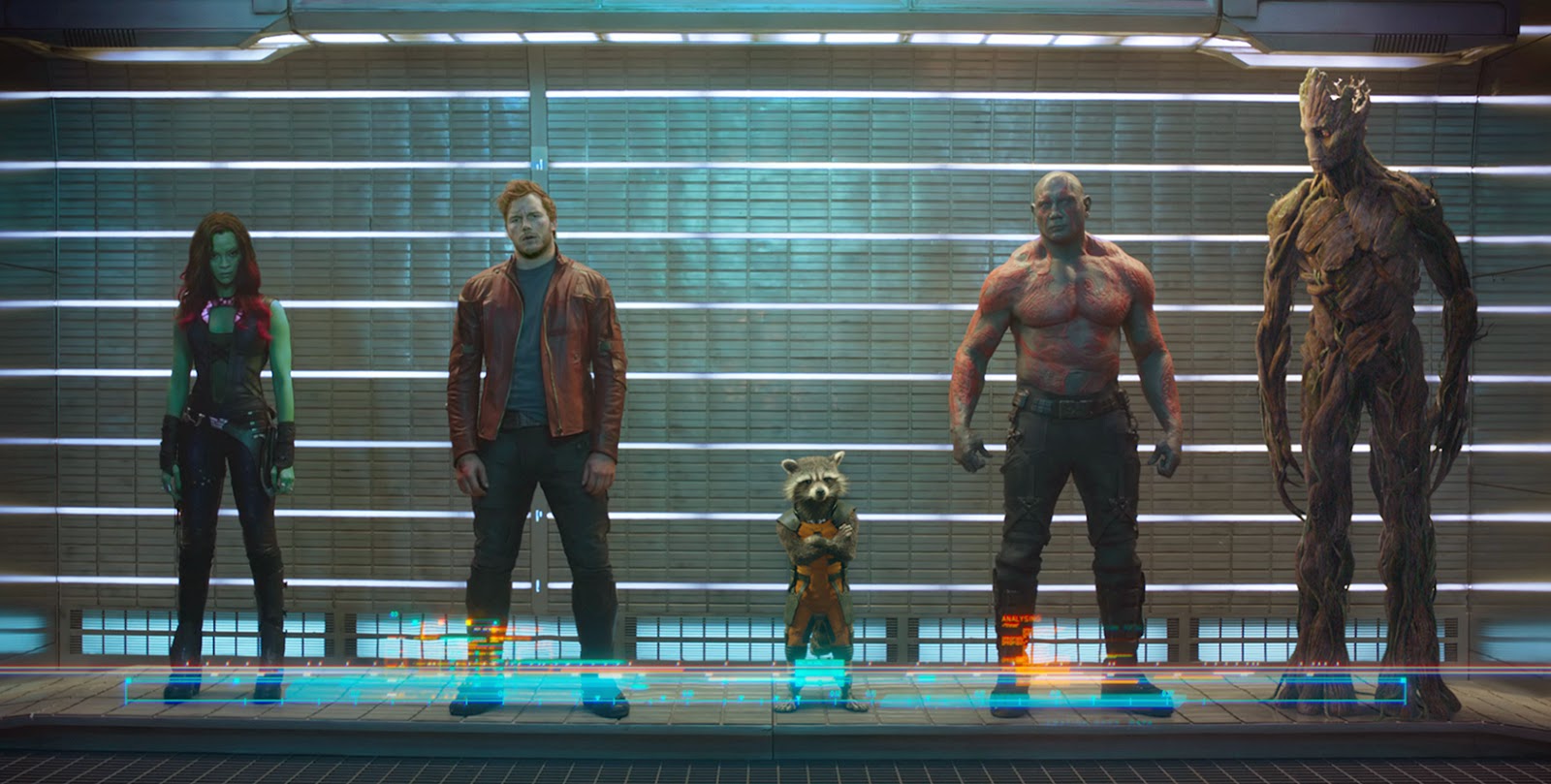 The story in this film is one of the most fun stories that I have ever seen in a good while and I especially love how this film isn't afraid to be a film based on a comic book. This film also has a perfect blend of sci-fi, drama, action, and comedy and you'll find yourself enjoying all of it and it'll keep you from taking your eyes off the film. You'll also find that this film will just fly on by and as soon as you know it you'll be in the lobby buying another ticket to watch this film as it also has a lot of re-watch value. The action in this film was spectacular, was well choreographed, and very over the top but that just adds to the charm of the film.

Characters in this film were good with very charming personalities that made them instantly likable. Acting in this film was decent but nothing that would earn this film any awards for acting but it wasn't aiming for that as it was aiming for pure fun (I say "fun" a lot in this review, get over it). I was a bit worried as to how some characters would be portrayed in this film due to this film being the first time that many of these Marvel characters were appearing on film. I wasn't disappointed as characters like "Thanos" and "Rocket" were portrayed perfectly in this film and almost to what I had pictured they'd look like in my mind. I was a bit disappointed that there was no way that we'd be seeing characters like "The Fantastic Four" and "Silver Surfer" in this film due to "20th Century Fox" refusing to give them up for the sake of having us fans being happy (I'm going to pull a Stephen Colbert and wag my finger to you "20th Century Fox). There were characters that appeared in this film that I did not expect to see and it was awesome and so will you. 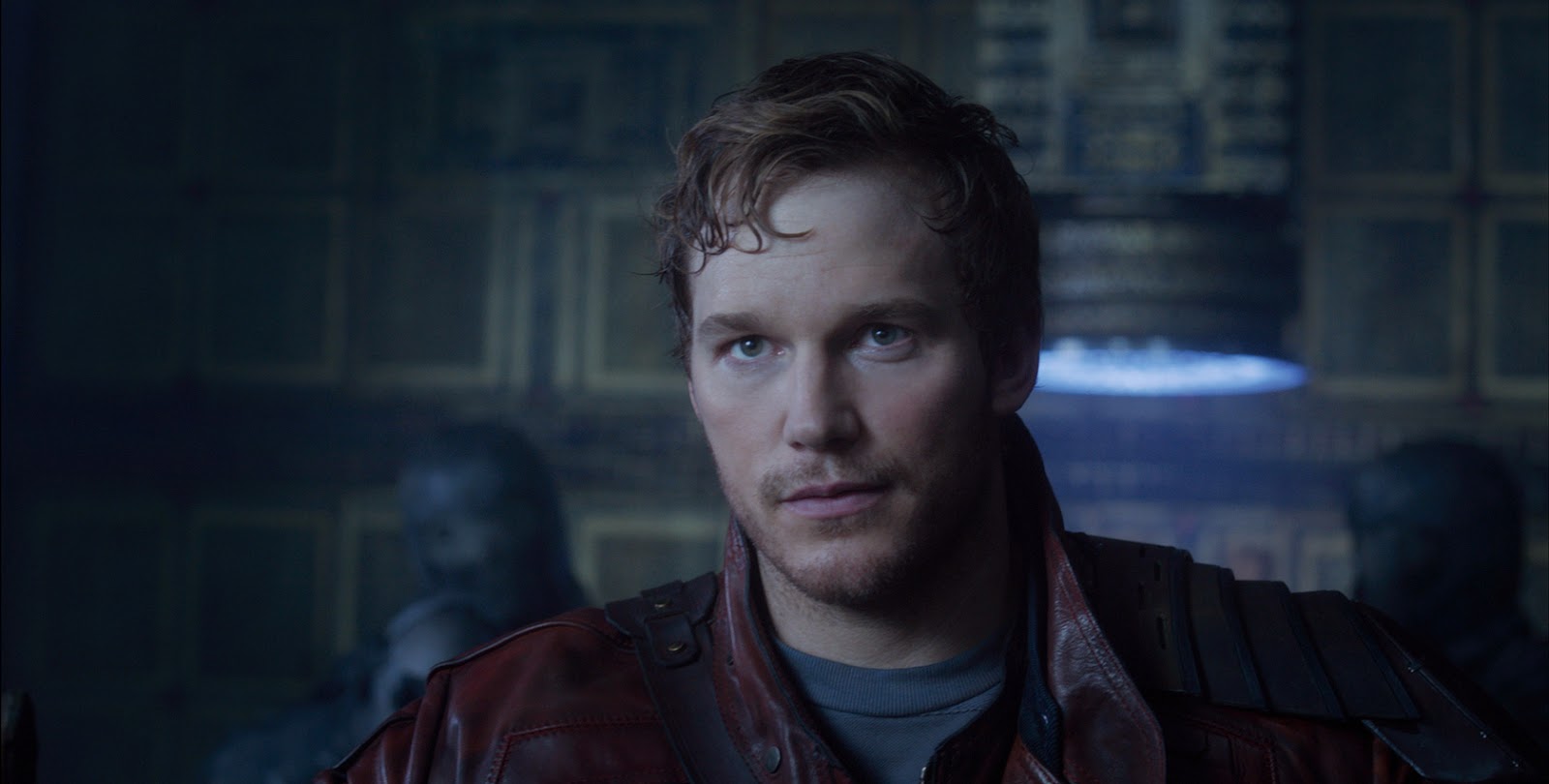 Not only is this film a fun action film but it also sets some important key plot pieces for future Marvel movies to come. While this film does that you won't find this film feeling like a glorified teaser trailer to something like "Avengers 2: Tonight We Dine on Rice and Other Stuff/ Much Ado About Hawk-eye (2017)" as that feels more like bonus features that were fun to spot. You'll defiantly be watching this film for the story and characters for the reasons that I mentioned in the above paragraphs.

There's a lot of computer generated images in this film and for those who fear that loads of computer generated graphics ruins movies (like me), prepare to be dazzled as I really enjoyed the CGI in this film. Computer effects looked really good in this film and they really helped capture the deep space and alien worlds atmosphere. I especially loved how they used CGI because they had to rather than because they could as there are also a lot of effects that doesn't use CGI, this also helped made the effects look better as both styles blended together well and doesn't break your immersion (don't say anything Swingle*) at all. There isn't much bad that I can say about this film other than some of the drama did get a bit too "icky" for me but that only happened during one small scene. 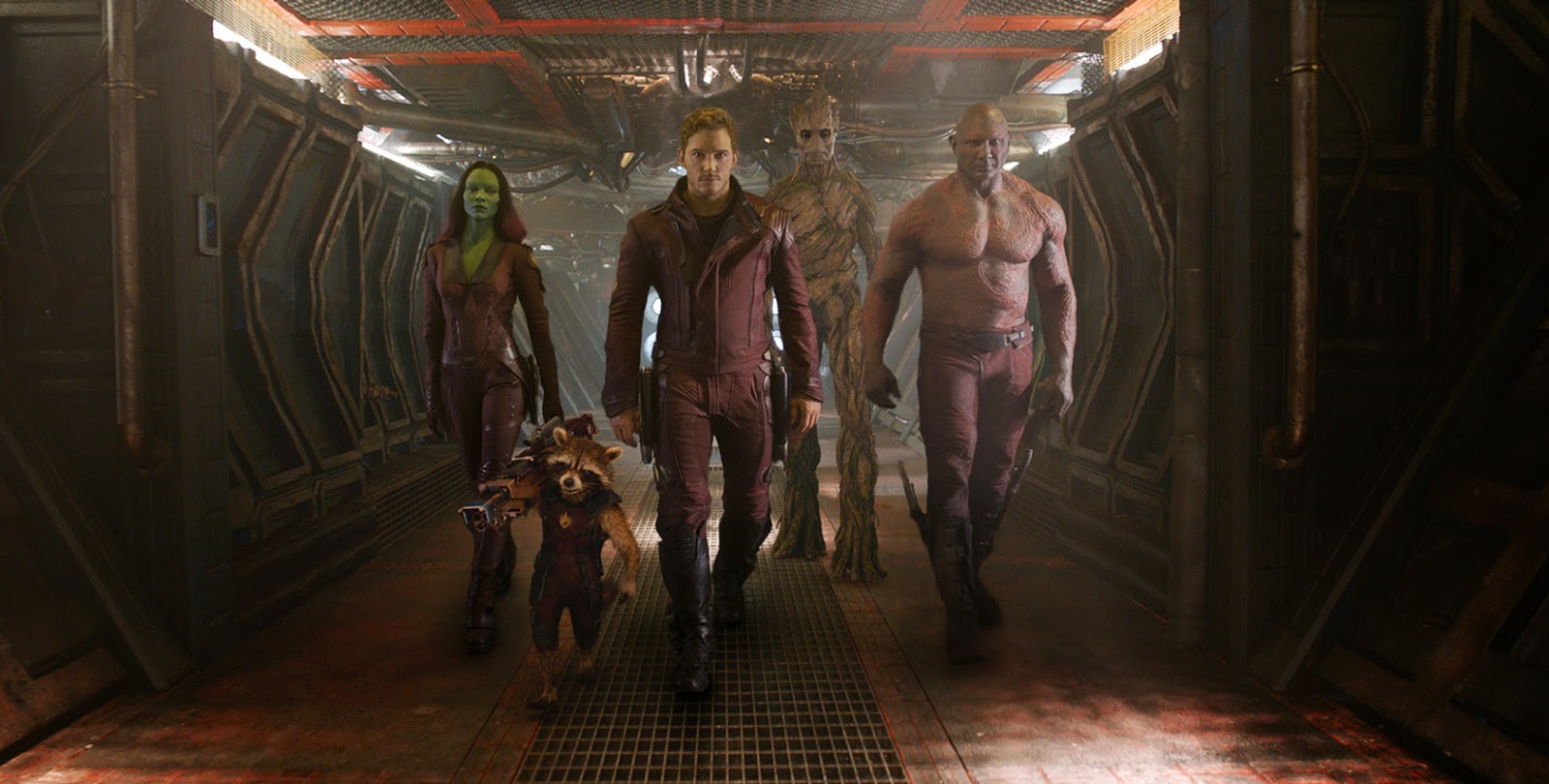 The soundtrack in this film was pretty damn good with not only a good original score but also has a great selection of licensed music. The original score had an epic sound that really worked well with the action sci-fi theme and helped build up some atmosphere. The licenced tracks are all classic rock and new wave tracks from the late-1960's - early-1980's and they were used in a very genius way to where it oddly made sense with the story and that made the film even more awesome. I enjoyed the track list so much in this film that I actually ended up buying the darn thing.

While I rarely do a "special features" paragraph on a cinema review, I couldn't help but to write one for this review. What does this film have that I consider a special feature? Well if I said what it was outright, that would be giving away way too much. What I can say is that you should stick around to after the credits have rolled as Marvel have worked wonders once again by putting in another awesome post-credits scene that's worth sticking around for (pity a lot of readers might already know due to being impatient and searching it on some small time website like "YouTube" or some s**t like that)..

Overall this was a great film and is the best film that I have seen this year so far... Mind you, I only have seen a very small amount of films that came out this year. This is a film that is worth getting on DVD/Blu-Ray when it comes out but this film is even better experienced in the cinemas. I know I might've reviewed this movie a bit too late in it's cinema run but go see it while you have the chance and once you've done that you should watch it for a second time. Pure fu***ng awesome and fun, fun, fun, fun, fun.