"Bardbarian" is an RTS (Real Time Strategy) game mixed in with some tower defense elements. The game itself is about a character named "Bardbarian" who is a barbarian with an axe that doubles up as an axe and by that I mean a real mean guitar (you see what I did there?). Bardbarian has a job to do and that is to defend the town that he lives in and it's gem from an army of monsters that are all hell bent on destroying it any way they can. Lucky for the town Bardbarian isn't just a great musician and warrior but he is also a great leader with a helpful army on his side ranging from classes such as: Magicians, Ninjas, Swordsmen, Healers, Mechanics, Necromancers, Witchdoctors, and many more. So grab your golden guitar ax... Or maybe just a keyboard or a controller as this is the day we go to war that will hopefully end before dinner time. This is Bardbarian! (Click "Read More" to read the full review). 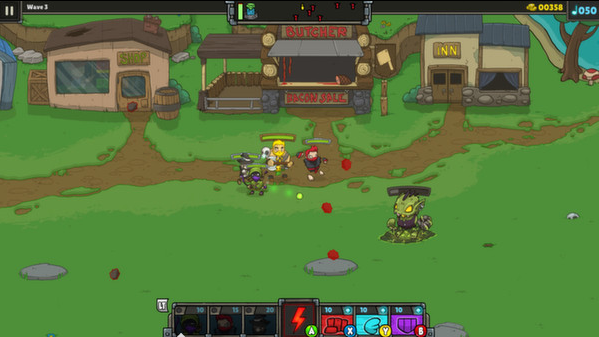 The story in this game is simple to what you see in the description is what you get but it worked well for this game. The difficulty in this game starts off moderate and gets tougher as you go along. The game does get easier when you level up your troops and buildings with all the gold you gain from killing your enemies but not so easy to where you can sit back and relax as the final levels do get challenging. This game isn't challenging in a bad way as when you lose you'll be inspired to play again and again and again and get further and further and further. This game does use checkpoints that unlock after you have beaten a boss so when you die late in the game you do not have to start all the way back from level one. There is also a lot of re-playability to be had after you have beaten the game as you'll find yourself playing the game all over again to see if you can beat the game in one sitting. When the game becomes too easy for you, you can select "Insane Mode" for a greater challenge and while it is harder you'll find that it isn't impossible to beat.

There are also other modes found in this game including an "Survival Mode" where you are in an arena battling infinite hoards of monsters. This mode is fun to play for a little while but you'll soon find yourself getting bored with it and going back to the main mode to find better things to kill. The other mode is "Escape Mode" where you find yourself in a cave trying to get deeper in while randomly generated obstacles pop-up while also collecting gold... So you're not really escaping at all but more like trying to get as deep as you can. This mode is great and you'll constantly find yourself trying to beat your high score every time plus it is also a great way to grind for gold to get the upgrades that you need as it doesn't feel like that you are grinding at all. 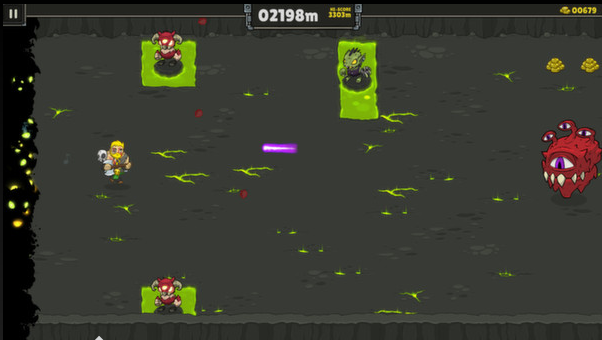 The controls in this game are quite well varied as you can play this game completely with the keyboard, completely with a mouse, or a mixture of the two. They are all pretty smooth and very easy to get the handle of. I personally like to control Bardbarian with the keyboard while I summon my allies with the mouse. Once you've killed a certain amount of bad guys in a row you can pull off an ultra powerful move that stuns every enemy on the field and it is actually a very useful move and you'll find yourself getting out of very tough situations just by using it. One problem I found with the controls is that sometimes they like to stick with Bardbarian going the same direction without being able to change unless I exit the level and start again. Another odd problem is that the controls also stall as well as sometimes when I press another direction Bardbarian doesn't do anything until I hit the direction again. I initially thought the problem was with my keyboard but after a few tests it ended up being the game itself.

Graphics in this game have a very cartoony look to it with very clean sprites but unfortunately it also looks like a flash based Internet game. The sprite animation isn't all that good as it looks very cheap and quite floaty. The soundtrack uses a rocking hard rock and heavy metal sound that works well with the game. 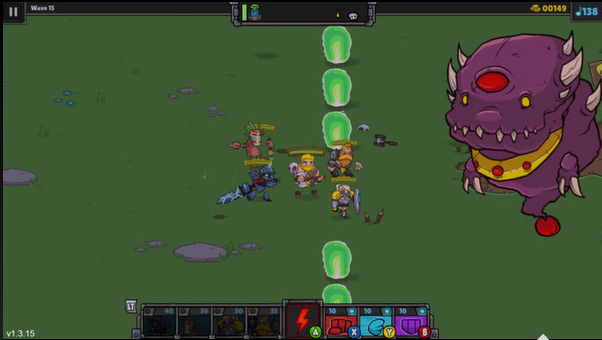 The Steam version of Bardbarian contains some characters that can't be found in any other version of the game and those characters are: Meat Boy ("Super Meat Boy (2010)") and Isaac ("The Binding of Isaac (2011)") as a team, Octodad ("Octodad (2010)"), and a huge turtle with powerful guns. These Steam exclusive characters are some of the more stronger characters found in the game and are also some of the harder characters to master but when you do master them you'll find yourself using one of them in your team every time you play the game (I always use Meat Boy and Isaac when I play the game). All three characters also have their own battle style so they aren't just cheap pallet swaps.

Overall I really enjoyed this game and I still play it all of the time as it is very fun. For the price it is I say it is worth it as you'll be enjoying this game for hours upon hours and so on and so forth. A really good game.